Reflections on the recruiting pond 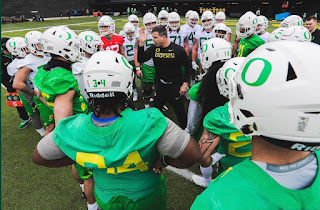 First Some recruiting tidbits. Much of what I do is behind a paywall so I don't get to share much of the inside information very often. What I share now are some recruiting notes I passed on to members of Duck Sports Authority over the last week.

A week ago, there were some important notes regarding some Oregon targets and I shared them in our premium recruiting message board, The Casanova Center.

DUCK BITES
(This is from last Thursday)

There are a few important Duck targets making visits this weekend. Among them:

-Five-star cornerback Chris Steele is taking an official to USC. Florida insiders tell me that they feel it is a Florida/USC battle and that Oregon was never really an option. Oregon sources tell me different

- Alabama is hosting a big cookout this weekend and many of the nation's top prospects are set to attend including a couple of Duck targets. Five-star linebacker Kayvon Thibeodeaux is expected to attend and five-star defensive tackle Ishmael Sopsher might also make it out for that.

- Also, take this for what it's worth, but Florida fans are starting to worry about Mycah Pittman. A week ago, there was no conceivable scenario to them where Pittman chose someone other than them. Now they are concerned. Oh, and they have already started to "turn" on Dan Mullen a little bit.

- Everyone always wants to know about Mycah Pittman. Some are 100% convinced he is a Duck, but Florida coaches are not so convinced. There is word that he is set to announce, but it does not appear imminent. Still a two-horse race between Oregon and Florida.

- Jaquaze Sorrells had a lot of early love for and from the Ducks. Right now, he seems to be leaning toward South Carolina and staying closer to home. I have been to Williams-Brice Stadium and it is a very cool place on game day. Will Muschamp is doing a really good job there.

- Linebacker recruiting is always something fans are curious about. With Andrew Johnson likely sitting out this year with an ACL recovery, depth is still questionable. The Ducks made an offer to Shamar McCollum out of South Carolina as they expand their reach looking for depth. The Ducks like Tufono a lot, but right now he seems likely to head elsewhere. Best bet for a commit of the offered LB's is To'ooto out of DeLaSalle.

I know Ralen Goforth is considered a long shot, but the staff like their chances there. Miki Ah-You committed to UW and he is likely firm there. I think Daniel Heimuli is likely to land somewhere other than Oregon as well.

The staff do like Kyle Smith out of Los Gatos; let's see when they get a fully committable offer to him what happens.

- The Ducks are still looking at a few defensive ends. Consider Thibodeaux the longest of long shots; Alabama feels really good and he's not coming to Oregon.

THE VAGARIES OF COVERING RECRUITING

Just some thoughts and commentary as we get into the heart of recruiting for the class of 2019.

What we do is a very competitive business; and that seems odd at times. After all, we are not directly advocating for or against any particular school or prospect; we are simply passing along information to football fans. In the course of doing so, I think some people lost sight of what matters at times.

Let me get into more detail. There is a lot of effort at proving connections, at being first, at somehow trying to entrench a mythical position as the best at what we do. I see it a lot and I have experienced some of the negative side effects of the many people involved in covering recruiting - especially surrounding the sites that cover Oregon.

I am remiss to get into the mud with pigs because I often remember that I am sort of the accidental tourist in this entire industry. I was just a guy with a keyboard who stumbled onto something I found interesting. I was the counterpoint to a somewhat misleading narrative. And then I became a part of the industry.

I have attempted to remain above the fray and rarely respond to the craziness which has crept into the three sites. I sit back at times and reflect; we are all just people living our lives as best we can. We make mistakes. We learn. We continue. It is along that line which I also find the deepest scars.

There are a lot of things said out there which have zero basis in reality. There are times I desperately want to defend myself from the lunacy and stupidity; but I also feel that to do so would somehow be detrimental to someone else. I am not one to use a scorched earth approach to my relationships. Even when others sink down and wallow in the mud with pigs, I try to take Michele Obama's advice - when they go low, I stay high. And I will continue that approach to covering recruiting.

What I do want to be very clear about is that there are basically three sites that cover Oregon recruiting. I work for one and I have met those who own and work for the other two. I have nothing but respect for both of those men. I have shared drink and conversation. I have expressed heartfelt sympathy to both and will continue to be as respectful as possible to both. If you hear or read anything different, consider it fake.

- I don't necessarily think being the first to report something is the most important thing. Sometimes I come across information and I share it; if I am the 'first' to do so, that really is unimportant to me.

- I consider writing an art. As an artist, I always struggle with the vision I present and want to be the best at the art as possible.

- Speaking in absolutes is a bad idea generally. Never. Always. Those are terms which beg to be wrong as soon as they are uttered.

- I have been very open with those people who have come to me with a genuine concern or question. If you ask me a question via DM, I try to be honest and direct. If you simply go to Twitter and make wild accusations, I just ignore.

- One thing that makes writing for a network like Rivals so rewarding is just that; it's a network with coverage of every Power Five school. That means when I get information from an Oregon source which seems a bit 'too positive' I can check with some sources at other schools for their take on the situation. Sometimes that take is wrong (as happened with Devon Williams last cycle) and sometimes it is dead on.

- With the Mycah Pittman coverage that is a lot of what I experience. I could easily just parrot what I hear from Oregon sources, but I want to be sure sometimes when the math doesn't add up. That's why I checked with Florida folks about Pittman and got a different read. Suffice it to say, as of the last time I checked with Florida folks, they felt fairly confident;as do Oregon sources.

- One other thought about this whole thing. And this is targeted to recruits and their families. I hear a lot of things about the lives of recruits. I have heard some very deep and personal things over the last seven plus years of doing this. We all have a choice to make in what we share; but when it comes to those things that are deeply personal - like the family dynamics that play a role in recruitment, I only report what the family is comfortable with me making public.

It would be easy to hide behind the 'I am just reporting what I know' concept and spill out everything; but that is unfair and wrong. These are not major political figures or professional athletes making millions of dollars; they are high school prospects. If I happen to know some small detail of why a player is torn between two schools that relates to family dynamics, unless the athlete or family agrees to having those details shared, they stay private.

I have nothing to prove so sharing intimate details about a family serve no purpose other than self-aggrandizement.