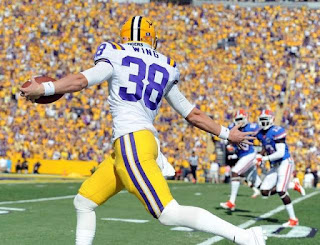 Saturday afternoon, in a game never as close as the score, college football saw the first application of the new taunting rule when LSU punter Brad Wing, took the snap and went to his left. The play was brilliant in design and execution; until the 8 yard line.

As it became clear that the former Australian Rules Football player would score his first touchdown as a collegiate football player, he put both arms out to his side and looked at a Florida player. The display was brief, but resulted in a 15 yard taunting penalty.

There have been views expressed, most of them saying that the application of the rule was ridiculous. But, was it? The rule does mention that the act must be "egregious." But who is supposed to define egregious? That makes it a judgment call. Earlier this year, a Pac-12 official made statements that said the Oregon "O" flashed by players could be considered unsportsmanlike conduct. In reversing his opinion, likely with a gentle nudge from Pac-12 commissioner Larry Scott, the conference Head of Officiating, Mike Pereira declared that the sign is not a penalty as it is not used to "bring attention to the individual."

This is a good place to start with the new rule, any act that brings attention to an individual and/or attempts to directly belittle or ridicule the opponent is likely to draw a flag.  Wing did not look at a teammate when he made his gesture, he looked directly at the opponent. Though the gesture was brief, it was made in a manner that both brought attention to himself and could have been considered belittling to the opponent.

Look, these are big boys in college football. I know the argument; you want to stop him from taunting, tackle him; make the play. But we forget that with the ever increasing popularity, a collective set of youthful eyes are watching these players they idolize and hope to be like someday. Have you ever seen a 10-year-old kid talking trash to adults as they walk by? I have. And, I can tell you where they learn it; television. As long as taunting by their heroes is tolerated, it will be emulated by their fans. Many of us Duck fans experienced a similar fate as we walked out of Cowboy Stadium on a warm September night. Did you notice that those acting as poor sports happened to be in a younger generation? I did.

I am not one to take the fun out of college football. I played a little bit and enjoyed playing; I enjoyed the banter with defensive backs. But when you score a touchdown, do like LaMichael James does, run into the end-zone, toss the football to an official then go celebrate with your team-mates. Have fun celebrating. Just remember, celebrate after you score not before.

Was the application of the rule heavy handed? No. The player violated the intent of the rule. And Brad Wing knows that the call was right saying after the game "It was very silly of me. I apologize to my team. Showboating is definitely disrespectful, but that was not my intent at all. I apologize to the Florida players. I don't have any disrespect for them. They are a great team."

I give credit to Brad Wing for recognizing that, while his intent may not have been bad, the act itself was showboating. In the end, fortunately enough for LSU, this penalty had no real impact on the outcome of the game. Maybe, though, it let everyone know that taunting is just not going to happen in college football. No more flips into the end zone; no more high-stepping; no more stopping at the one yard line just to "fall" into the end-zone. This is a good thing. let us watch some of the very best athletes int he world play the sport the way it was meant.

No one would have taken away his joy had he waited to celebrate after the touchdown.The joy of the game; players having fun and enjoying themselves; that can never be taken away. But maybe, just maybe, the players will teach younger kids a purer version of the game. Maybe next time you walk by a group of kids playing football, they will simply be playing the game and enjoying themselves. Just like their college football heroes.

Brad Wing may have had his touchdown taken away. But he might have helped change the way we play the game
Posted by Scott Reed at October 10, 2011