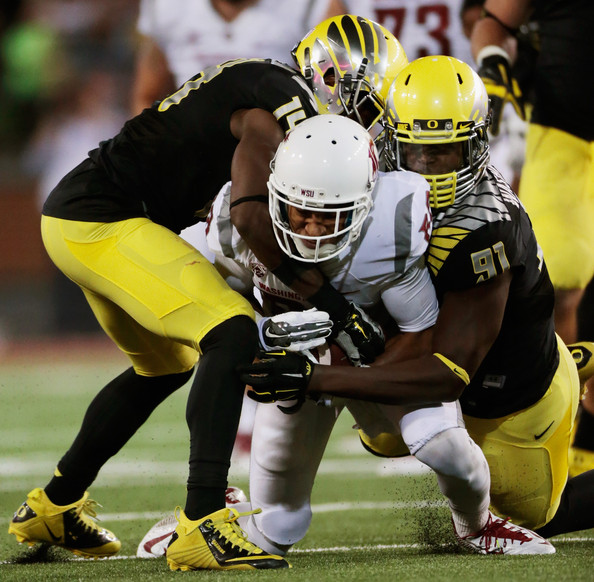 After a gut-wrenching victory which saw the Ducks exorcise some demons from last season, the Cal game also cost the team its star quarterback, star running back and a starter at linebacker.

How on earth can Oregon win against Washington State? The Cougars are ranked No. 11 in the nation and are coming off of their first victory over a top 5 team in a quarter century. The Cougar defense is as good as it has been since the Mike Price days and it is still a Mike Leach offense.

While that defense is good, it is anchored by some undersized defensive linemen and the Ducks have a chance to do some things against their defensive front. Hercules Mata'afa is having an outstanding season; but it is largely a season built on his speed around blocks and movement before the snap. It is one of the oldest axioms in football; how do you attack a fast defender? Run right at him; take away his edge speed and you take away his advantage.

This is a game in which the Ducks new 'power run' game could really pay some dividends. This is also why Braxton Burmeister is the best option to start at quarterback. He simply has that 'it' factor as a quarterback, especially with the ball in his hands. He did not show too much in his work last week, so there is very little film for Alex Grinch and the Cougar defense to watch for clues.

Defensively, the Ducks are better equipped to face this Air Raid offense than they have ever been. They are two-plus deep at both safety positions and have four Pac-12 level corners that can cover very well. Arrion Springs is having a fantastic senior campaign, Thomas Graham is everything we have been saying he is, Ugo Amadi has played very well this season and Deommodore Lenoir gets better every week.

I watched a lot of their game versus USC and can say this - they give up a ton of sacks; 20 so far this season. If Oregon can get pressure on Falk, get some knockdowns and even a couple of turnovers, it will go a long way to keeping Oregon within that striking distance. It is going to be a tall task, but not entirely impossible; there is a reason that the line has stayed within a four point range from the open which had Oregon as the favorite.

I think to win the game, though, the Ducks are going to need a non-traditional touchdown; either a special teams touchdown or a defensive touchdown.

The Ducks are still looking at holding off most of their top recruits for the final official visit weekend prior to the early signing period for football. Willie Taggart wants to make that last great impression and get the recruits 'juices' flowing. He took a chance last weekend for a reason. I talked about the inside details today on Duck Sports Authority and our weekly Wednesday War Room, but there is a very specific reason for that decision. Check DSA for the inside details.

Something to talk about

Oregon leads the Pac-12 conference in sacks recorded and tackles for loss; and they lead the conference in fewest sacks allowed. While the latter has been a staple of Oregon football since at least 2007, the former is quite the telling statistic.

But there is a caveat to those numbers; they come against some of the worst teams Oregon will face. The real test of this defense is not what Jim Leavitt had them do through the first five weeks; and the last two games against Arizona and Oregon State probably won't tell us much more. But the next five games, against Washington State, Stanford, UCLA, Utah and Washington will fill in the blanks on the 2017 season.

I really like this defense against Stanford, UCLA and Utah. I think those offenses are ones the Oregon defense can work well against. The two Northwest schools, though, will provide different challenges. So watch closely this weekend how the Duck defense performs against WSU. If they are able to control the explosion plays and keep the score below 35, that will be a very impressive feat - and a sign that the team has already turned a very important defensive corner.