The Aesthetic Beauty of Football 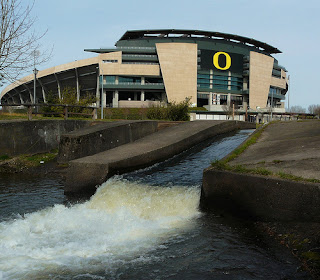 Football season begins in earnest this week. With the official end of "fall camp" and the beginning of game Week, we know that football will soon arrive.

Imagine for a moment, arriving at the Autzen Complex on September 10. There will be grills barbecuing all your favorite foods. Duck fans gathered to talk football, celebrate with each other the new season. They will reminisce about last year, and dream of the possibilities of the upcoming season. Football has indeed started.

What is it, though, that draws fans of every major conference, and even the "non-BCS" conferences to gather by the thousands and derive so much pleasure in the competition of others? Why is it that these loyalties to particular collegiate institutions run so deep? Deep enough, in fact, that rivalries are indeed very real.

There are many theories and I am not the first to have this discussion. The first, and most obvious is the concept of tribalism. We are often attracted to a team based on different extraneous factors. In professional sports, it is almost entirely about proximity to the team. With college sports, it is a number of different things. Either you were "raised" as a fan; went to the school; or adopted it as a favorite through other friendships. Human beings, by nature, tend to feel the need to belong to a larger group. There is safety in a group and danger in aloneness. Well, in tribal times, this was the case.

As civilization evolved, the tribal nature of our existence diminished, but our need to feel like we belonged to something bigger than ourselves did not vanish. As society has become increasingly less personally interactive through devices such as phones, automobiles, planes, cell phones and now internet technology which has made communicating without contact prevalent, fanship seems to have grown and become more intense.

“People come back from the game yelling, “‘We won! We won!’ No: they won; you watched.”

This is true of just about everyone I know. We try, sometimes with all of our effort, to convince ourselves that it is "just a game." But it's not. It is more than a game; it is an experience. It is an experience that draws people together, almost into regional clans.

But there has to be more to it than that. After all, there are plenty of other activities that could draw our attention, so why sport?

There are many other schools of thought. The most interesting to me, though, is from Hans Ulrich Gumbrecht Professor of Literature at Stanford University. In his book In Praise of Athletic Beauty, (2006, Harvard University Press), Gumbrecht proposes a different attraction. Aesthetic Beauty.

Every fan cares abut "their team" winning and Gumbrecht does not disagree with this assertion. Nonetheless, he believes that even within the most diehard fans there exists a certain amount of appreciation for the beauty of the game. Gumbrecht argues that beauty is the least mentioned of the important reasons why people love sports, and that is why it is interesting to discuss.

While every fan enjoys the thrill of victory, there is a certain amount of truth to Gumbrecht's theory. Think about it for just a moment. Deep down, fans of every sport derive pleasure not just from winning, but from some element of the sport much more profound.

Think to an oblong football, released from the quarterback's hand, spiraling through the crisp night air at Autzen Stadium. The ball seems to hang in the air as a Duck receiver streaks down the field arriving at the exact moment the ball descends from the night sky into his waiting hands. The experience itself of watching all of these unique elements combine is a thing of beauty.

Think for a moment, have you ever watched an opposing player make a play and said to yourself "Wow, what an incredible play?" Most of us have; that is the aesthetic beauty of which Gumbrecht speaks.

I tend to believe there is a multi-factoral combination of different aspects that draw us to sports. There is the tribalism, the social connection, the aesthetic beauty and the feeling of a tangible goal at the end; victory.

As we contemplate another season at Autzen, let us enjoy all the little things that make football, though a physically tough sport also one that is a beautiful combination of strength, speed and athleticism. Enjoy the company around you, that is what makes human kind so unique. And, most of all, enjoy each moment for what it is; a beautiful distraction.
Posted by Scott Reed at August 25, 2011