Who was Lache's Mentor? Part II 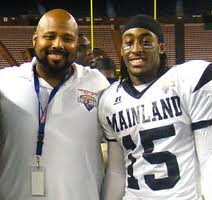 The more in depth you get into Lache Seastrunk's life, the more you understand his desire to get away from Texas.
During the Summer before his Senior year in Temple, Texas, Lache Seastrunk should have been on top of the world; a dream was about to come true. Yet through this dream, turmoil reigned. Turmoil in his personal life truly took a toll. We all heard of Lache Seastrunk as an incredibly talented running back who was bound for glory. But something happened along this path; he saw diminishing returns. In his Sophomore season, Lache rushed for 1532 yards on only 130 carries, 11.8 yards per carry. Not bad for a sophomore, he also scored 19 touchdowns.
In the following season, his performance slipped some, carrying the ball considerably more often, but rushing for nearly the same amount of yards; his yards per carry dropped to 9.0. The argument could certainly be made that his opponents adjusted. Nonetheless, he was still one of the top 3 running backs in the nation; he was going to college and he was going to receive a full athletic scholarship. The only question was where.
Chaos started to reign during the summer before his Junior year. His mother had recently gotten out of jail, those "bad decisions," when she accompanied Lache and Lyles to an LSU camp. At this point, it appears that everyone involved in Lache's life began infighting. His high school coach was worried about Lyles.
After learning of this new influence that summer of 2008, Bryce Monsen called Texas Offensive Coordinator, former Longhorn QB Major Applewhite. Applewhite was not very complimentary of Lyles; this is the first time Coach Monsen had heard Lyles referred to as a “street agent.” Now, it is no surprise that Applewhite spoke lowly of Lyles, the Longhorns, who still own the state when it comes to recruiting, had seen what they considered a few too many top flight recruits leave the state; kids that they used to land were leaving and they were not happy about it. This does not negate their characterizations, they may have truly believed it when they told Coach Monsen that Lyles was “bad for kids.”
There were now competing interests for Lache's allegiances. It became Willie Lyles against Coach Bryce Monsen. Understand that Monsen felt a great amount of empathy and compassion for Lache. He had seen Lache bounce around being taken care of by various family members, churches and even coaches during his tumultuous life. 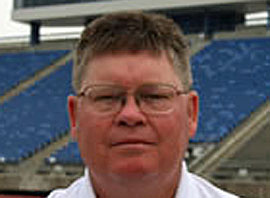 Coach Bryce Monsen
As has already been documented, Lache's father has been in and out of prison most of Lache's life. His mother was in and out of prison as well. Some of the charges which she served time for are what most would expect like delivery of a controlled substance (cocaine); she dealt drugs. She also served time for assault causing bodily injury. This was not the most stable home, which is why he was raised, for the most part, by his grandmother.
Coach Monsen, having worked for the Temple School District for nearly a dozen years, felt close to Lache and had seen him grow. Despite all of the turmoil in his life, Lache was deeply spiritual, but also deeply in need of a father figure. With Lache's father in jail, many would hope the coach of his football team would fill that void. But there is a cultural difference that made it difficult for Lache to connect with Bryce Monsen. That divide left Lache still looking for a strong father figure; or ANY father figure.
Soon after Lyles met Evelyn Seastrunk, Evelyn was fairly blunt with Coach Monsen. He was just the coach and was to have no involvement with the recruiting of Lache; the family would take care of recruiting.
Coach Monsen openly worried, he drove down to that LSU camp in 2008 to speak to Lache, he wanted to make sure Lache was very careful; warned him about ensuring he took no gifts, no money, nothing that could be considered an extra benefit. Lache assured him that Lyles was only trying to help with getting a scholarship.
This is where the stories begin to diverge. Each member has a different recollection of how the relationships moved forward. Coach Monsen says that Lyles was in town three or four days a week, while Lyles says he only stayed at Evelyn Seastrunk's house a couple of times when he was in town for video. We will likely never know the true nature of Lyles' relationship with Seastrunk's mom. What we do know is this, she had a lot of pull with Lache. This is pretty common in situations like theirs. Lache, though she was frequently in jail for an assortment of drug and other offenses, loved his mother very much. He was encouraged by those that loved him, like his grandmother, coaches, church family and high school counselor to not give up on her. When she got out of prison, he felt her influence.
Monsen does not say that Lyles and Evelyn Seastrunk were romantic, only that he stayed there sometimes three or four days a week. Lyles spoke to Jason Whitlock in May of this year and refuted the notion that there was a romantic relationship. "His mother and I had a friendship, but as far as a relationship, that's false. There was only dealing with Lache, and that's as far as it went."
Evelyn Seastrunk was very high on LSU for Lache; he had a cousin that attended LSU and the family was from Louisiana. There is no word how they afforded a trip for Evelyn, Lache and Lyles to go to the LSU camp. But we know that she later became contentious with Oregon Running Back Coach, Gary Campbell, when he would not fly her to Oregon for Lache's visit.
“I don’t know how he got there, but I know Lache’s mom didn’t come to Oregon and she was pissed at me because we didn’t bring her up here and everything. We couldn’t do it and we told her there was no way that we could bring her in. We didn’t do that and I don’t know what other people did.” Campbell said.
Coach Monsen was also worried about Laches multiple visits to schools. We know he went to Auburn three times and Monsen remembers both Lache and Evelyn making two unofficial visits to USC.
Many Duck fans will recall that Gary Campbell was able to successfully recruit Jonathan Stewart. One of the main points in Stewarts connection with Campbell was Coach Campbell's faith. And this is the same connection that Lache had with Coach Campbell. Lache's grandmother, whom he affectionately refers to as 'nana,' provided an incredibly strong spiritual background for Lache. We even see that today as his entire life is devoted to faith. He constantly refers to reading his Bible. It is this connection that all parties agree helped lead Lache to his decision to attend Oregon.
That, and the fact that he really believed Chip Kelly's offense fit his style and that he was a perfect fit at Oregon.
Lache's senior season was an even bigger disappointment statistically than his junior season. In his senior year, he carried the ball 177 times for 1179 yards and 11 TD's, that's only 6.7 yards per carry... a far cry from his stellar sophomore season that got him on the recruiting map. Something was happening and it was not defenses keying on him, his life was in turmoil. His mother, in and out of prison for most of his life wanted him to go to LSU, a man he had begun to trust was being called by everyone around a “bad guy." Even Texas OC Major Applewhite told Seastrunk in a phone conversation that Lyles was bad news. Lache did not want to hear this. Texas, which wants it's players committed before their senior season, had begun pressuring Lache for a commitment in Summer 2009. Lache revealed he was feeling some heat in an interview with Mike Farrell that summer.
In the end, Lache chose Oregon for various reasons, most of which have to do with the coaches at Oregon as well as the atmosphere.

The final decision on whether there were violations committed will be based upon one basic question, was Will Lyles paid to get Lache Seastrunk to Oregon? And, unless one of the two principle players, Seastrunk and Lyles, change their stories, I think it is safe to say that he NCAA will have a difficult time proving this charge. At this point, the only person we know of that “pushed” Lache to Oregon is Deanna Carter, and she is not yet talking.
Posted by Scott Reed at July 30, 2011