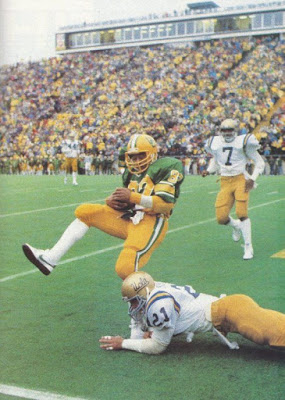 This week at Duck Sports Authority we looked at the top three wide receivers in several categories; All Time at Oregon; top three prospects for 2018; top three current Duck wide receivers and the top three receivers int he Pac-12. I actually enjoyed working on the top three all-time, but as I read around some of the other sites, it really stands out to me that there are a lot of people who only know Oregon football from 1994 forward. They have no memory of any really great receivers before Cristin McLemore.

Much of the focus for may fans is on guys that have played int he current era of Oregon football. I imagine that is understandable; it is difficult to really be excited about a name you have only seen in programs as someone who used to play. Forgotten are a bunch of names in between. For the top three, I really did not want to stop at three so I included a few that I called 'honorable mention' receivers.

The Case: Parker is the career leader in receptions (178) and yards (2,761) as well as the single season leader in receptions (77t) and single game record holder (16). His speed was something which other teams could simply not match and he became a dependable receiver over the course of his career.

The Case: Howry is not far behind Parker with 173 career receptions and 2,698 yards. he is tied with Jeff Maehl, Cristin McLemore and Josh Huff for the career touchdown record. While he never had a 'top ten' receiving season in yards or receptions, he was steady throughout his four years at Oregon. One of the most precise route runners in memory, Howry was the epitome of what a receiver could be.

No 3 - Bobby Moore. While he played running back at Oregon and would later become known as Ahmad Rashad, Moore still cracked the top ten with 131 career receptions. I included him for that and because he went on to become a fabulous receiver at the next level.

From here, though, it seemed almost unfair to leave out some others that belong somewhere in ORegon folklore as some of the best.

Bob Newland. He had one of the best single seasons in Oregon history with 67 receptions for 1123 yards in 1970. That yardage record stood for 43 years until Josh Huff (in more games) broke it by 17 yards; that was in just 11 games, so he would still own the record for yards per game in a single season.

Cristin McLemore - It is difficult not to include one of the best receivers of the early modern era in Oregon football. McLemore is a top 10 all time receiver in just about every imaginable category. His performance in the 1995 Rose Bowl against Penn State is still a remarkable moment.

Jeff Maehl - I ncluded him because he gave Oregon fans in the new generation some of their best highlights; the falling catch against USC, the two-point conversion in the National Championship Game. But he is also tied with Parker for career receptions (178) and single season (77); tied for second in single game receptions (12), is No. 4 on the all time single season receiving yards (1076) , and tied for the receiving touchdowns record (24).

Who are some of my favorite receivers of all time that are not 'greats' in the traditional sense? I loved Joe Reitzug for his incredible hands. That guy could catch a ping pong ball 5 feet above his head with his eyes closed. He simply had some of the best hands of any receiver I have ever seen - without using the 'sticky' gloves favored by many receivers today.

Before Autzen was filled with 60,000 people, some of us hearty Duck fans used to come out and watch rain or shine. One of the most electrifying moments from my youth was hearing the stands erupt with "LEWWWWWWW" every time Lew Barnes made a great catch or play. Barnes best season in 1985 saw him grab 50 passes for 789 yards and 6 touchdowns. Though his 117 receptions will hardly get much mention as an all-time great, I just loved watching him play. His 18 career touchdown receptions still leave him tied for 10th all-time at Oregon. His 2048 career receiving yards leaves him in 10th on the all-time list at Oregon as well.

Don Coleman - why? Because that dude was fast! In fact, Coleman holds the Oregon school record int he 100-meters at 10.11; a record that has stood since 1978!

Patrick Johnson - for one reason (well, more than one, but you'll understand) he caught a game winning touchdown pass to beat the Huskies at Washington. If that had been his only career reception, I would still consider him one of my favorites!