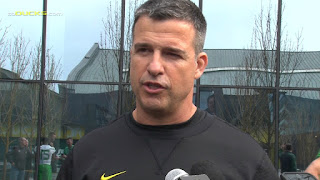 National signing day 2018; what a roller coaster of emotions fans went through yesterday. This is the roller coaster on which every coach across the country rides every day, every week of every year. When you start recruiting people who are only 15 years old – with visions of collegiate and NFL stardom still dancing in their heads almost as vividly as the sugar plumbs dancing  in the heads of children the night before Christmas – you get a lot of excitement and hyperbole.

That is much of what was faced by Mario Cristobal and staff as they attempted to finish out the class of 2018 from a recruiting perspective.

So, what happened? We all know that the staff had some pretty lofty targets that chose elsewhere. Many of the younger people out there probably won’t remember Paul Harvey (Google it!!), but he used to have a snippet of news called ‘The Rest of the Story.’ Essentially this was his information about a topic on which there were reports, but did not include some interesting anecdotes which might change the perception of the event itself.

It’s the context that is sometimes missing.

In that vein, there has been an oft used term surrounding recruiting. Closing. People envision recruiting much like a sales job. Too many people have watched the movie ‘Glengarry Glen Ross’ and used the line always be closing as some sort of gimmick.  But I don’t know that closing a young person is really the best strategy (at least not in the sense which it is conveyed by fans about recruiting).

I have been in the transportation industry for nearly 25 years. At the start of my career, I worked in a local automotive dealership. Some of the absolute best “closers” I ever met in my life worked in this industry; and they made a lot of money closing deals. But you know what happened too often? Dissatisfied customers. They were closed. Objections were overcome with additional sales tactics and they later regretted their decision. Do that with a high school athlete and the potential dissatisfaction can not only create a transfer, but a level of toxicity within the locker room that has the potential to destroy more than just a single season, but an entire program.

Obviously that is not the kind of closing people want – really they just want ‘their coach’ to get the recruits ‘they (the fans) want’ the most. That’s fair. But to assume that any coaching staff are ‘bad closers’ after a single recruiting based on faulty logic and a lack of information is not really an accurate portrayal.

In a car dealership, when a customer is in the office, they have the chance to ‘close the sale’ right then and there. Pen to paper. Contract. Sold. Coaches in college football do not have that opportunity. In a car dealership, there is not a representative from 130 other car dealerships also giving you their pitch to buy their product. There is one salesperson in front of the customer.

That’s what makes college recruiting so difficult. An assistant coach can only get so many personal visits; a head coach fewer than that. Once they have developed and continued to build a relationship, they get the athlete on campus for a visit. You know what they are always doing? Asking “closing questions.” ‘Is this a place you can see yourself?’ “Would you like to come play for us?” “Are you ready to commit?” Guaranteed. This is happening.

But, again, the coach does not have the contract in front of him and the athlete cannot sign that day. In fact, after all the visits are over, there is a quiet and then dead period in which they cannot have face-to-face contact; this allows the athlete an opportunity to continue the process without the high pressure of signing on the dotted line while on a visit.

The other part of this equation are those other 100+ odd coaches who are using the same tools; the same lingo; the same promises; to get young men to choose their school. Sometimes even the ‘best’ closers lose out to a host of other factors. Culture. Proximity to home. Weather. Girlfriends. Sometimes a baby. Outside activities. And sometimes some players just want to go somewhere different.

So, did the Oregon coaches ‘fail’ to close down the stretch on some big names? If by fail to close we mean ‘player A did not sign with Oregon’ then yes, the coaches failed. But that does not mean that they are not good closers, or good recruiters, it means that in the short time this staff was together they were unable to use their process to gain NLI’s. The real test was not really what happened down the stretch in the class of 2018, but what happens with the class of 2019 and beyond.

As with Paul Harvey there is a ‘rest of the story.’ Tomorrow, I will have up a little more in-depth look at just what happened with some of the top recruits on the board that chose other schools.