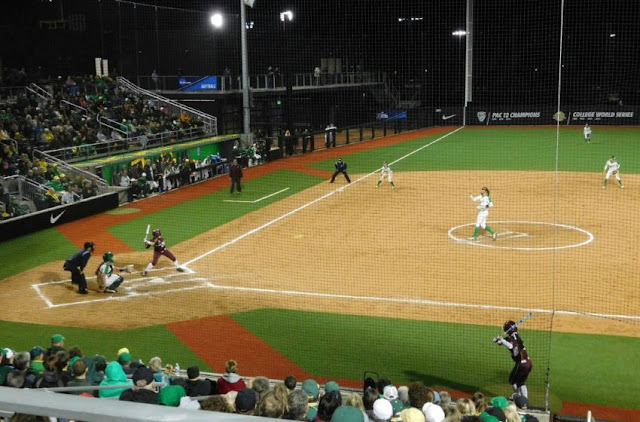 Not a ton of scoop tonight. Jonathan Giles committed to LSU today. the talented transfer receiver had quickly narrowed his choices down to three - LSU, Florida State and Oregon. His commitment to LSU is hardly surprising to me.

In my Monday morning article for Duck Sports Authority I led off with a quick look at Giles. One of the things I said there was that "this could come down to a couple of factors – proximity and offense. I think that LSU, with Matt Canada running that offense, might be a very difficult team to beat." That held true to form, but I did expect Giles to take a bit more time.

I imagine that there are some other factors at play here - as in some coaches probably wanted to get his decision quickly because it will affect their 2018 recruiting class to a degree. The Ducks are in on a lot of players who are just as talented - some more so. In fact, I also mentioned Tre'Shaun Harrison from Garfield High in Seattle. He has better size than Giles, is just as fast and has great athleticism and hands. I honestly think he has far more upside than Giles. Giles had the 'been there, done that' to his credit, but by the time he plays, Oregon should have several young receivers with as much experience.

I heard some really good things about some movement on a couple of important recruits. One of them is wide receiver Jeshuan Jones (6-1, 170) out of Fort Myers (FL). The Duck coaches really like him and are starting to make some progress. Getting him to visit and start considering the Ducks a little more closely is still a bit off, but the staff have made some inroads here and he is someone to keep an eye on.

The other name really made my ears perk up when I was told that Oregon was making up ground; 2019 strong side defensive end Derrick Hunter, Jr. A sure fire elite player with offers from a veritable who's who of college football already has high interest in Oregon; to make up ground' on someone like this is important here.This is a recruit being pursued by the likes of Florida, Florida State and Miami. Ray Woodie is leading the charge here, and you have to like his chances.

This is a pretty astonishing feat - the men and women have swept the conference titles for 9 consecutive years. The women have done so with incredible depth at both the sprints and some great middle distance performances and the men have just been dominant with middle and long distance running.

So, I have to make a confession here, I went to Churchill High school in Eugene. During the time I was at Churchill, our Lancers were in the midst of their own dominant softball run where the team won 9 of 11 state titles in what was then 'big school' softball. That streak ended in 1992 (I graduated in 1984) and that team was just so damn good it is difficult to explain.

So, I have this affinity for softball in addition to track. I don't live in Eugene, so do not get much chance to check out softball, but I love what Mike White is doing for that team and you should all enjoy what he is doing; he is making Oregon softball elite. The Ducks will host a regional as the No. 3 overall seed and, should they advance, will also host a Super Regional. This team has been on the cusp of a national title. Could this be the year? Maybe, but you should enjoy the moment.

Okay, well, all for now, enjoy your Monday night!